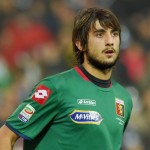 It has been reported that Genoa goalkeeper Mattia Perin is interesting Arsenal.

The Mirror says Arsenal are ready to target Genoa’s Perin after missing out on German keeper Loris Karius.

German U21 keeper Karius is set to join Borussia Dortmund when his contract at German rivals Mainz expires this summer.

Wojciech Szczesny was axed after his latest blunders which included being caught smoking in the toilets after the 2-0 defeat to Southampton on New Year’s Day.