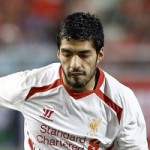 It has been revealed that Arsenal hero Ray Parlour is hoping that Arsene Wenger can make good on his promise of spending big this summer.

He told talkSPORT: “The board have said they’ve got money to spend so if I was Arsenal Wenger I’d say, ‘right, I’ll go out and spend £100m and have a right go this season’ and the fans would respect him for that.

“Why doesn’t he go out and buy Suarez for £50m? That would be such a boost for Arsenal’s fans.”