Reports are out claiming that former Arsenal striker Perry Groves has encouraged his old club to move for Real Madrid midfielder Sami Khedira. 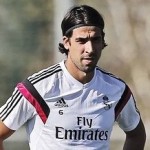 Groves feels the addition of the German international would transform their title push.

“They need to strengthen that defensive midfield area and the one that stands out in my mind is Khedira,” Groves told the London Evening Standard.

“He would be perfect for them.

“Khedira knows that role. He has the physicality and a great passing range. His attitude is good with a great winning mentality and it wouldn’t take him too long to settle because he would have his three German team-mates with him [Mesut Ozil, Per Mertesacker and Lukas Podolski].

“He would give Arsenal something different. A lot of their midfield players are very similar, very technically gifted players but Khedira will win the ball back to allow others to go and play. He’s proved he can handle life at a massive club and he could fit straight in.

“If Arsenal can get their injured players back while making sure the gap to the top doesn’t get too big with Chelsea and City then they have a chance to challenge for the title. If they can get to within six or seven points by the time the January transfer window opens and then sign Khedira, they could win it.”

Theo Walcott Delighted With The Return Of Jack Wilshere