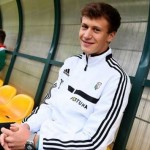 It has been reported that Legia Warsaw coach Henning Berg has no doubts about the talent of Krystian Bielik.

The Pole is set to undergo a medical with Arsenal today.

“Being 17 this month he is nowhere near the finished article yet,” Berg told talkSPORT. “He has a lot of things to learn and to improve and I really do hope that Arsenal, if they sign him then they really look after him, coach him and make sure he gets the best out of his potential.

“He can handle himself on the pitch. For his age he is a physical player but he has good skills and ball control.

“You don’t see too many kids his age that have come as far as he has at his age so he’s got a good chance. But you’ve got to give him time because to play for Arsenal in the Premier League is a big, big step up.”