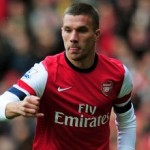 Arsenal will check on the fitness of defender Laurent Koscielny (calf) ahead of the clash with Bayern. Left-back Nacho Monreal, signed from Malaga, is ineligible, but Carl Jenkinson comes back into the squad after a one-game suspension. Defender Kieran Gibbs remains out with a thigh injury.

Bayern striker Mario Mandzukic, joint top scorer of the Bundesliga, looks set to start against Arsenal, with Mario Gomez again left on the bench. Bayern will be without suspended Jerome Boateng and injured Holger Badstuber and Claudio Pizarro, but can again count on midfielder Javi Martinez, who should be fit for the game after training on Sunday following a minor injury. The only minor discord in the Bayern camp is Arjen Robben’s dissatisfaction with his current substitute role.

Arsene Wenger: “It’s important we play with belief; we’re on a good run overall. The fact is that we’ve lost two of our last 11 league games. Nil-nil at home is a very good result in the Champions League knockout, but we’re an offensive team and we’ll try to go forward and score goals.”

Jupp Heynckes: “Arsenal are very good team, especially going forward, so we have to stand very tight in defence and then work our way forward. They’ve got a lot of tradition and history – they stand for passing football. They’re fifth in the league and they will be a very different opponent for us. You can really see how [Wenger’s] teams play as they have a real style and dynamic. I don’t have a result I wish for as such, but I think that we can win if we play at our very top level.”

Arsenal and Bayern Munich have met four times before in the Champions League, with the Bavarians winning twice, Arsenal one and the other being a draw.

Their last encounter dates back to the 2004/05 Champions League last 16 when Bayern won 3-2 on aggregate.
Arsenal have won six of their last seven home Champions League games against German opposition, the only defeat coming against Schalke in this season’s group stages.

Arsenal have only lost two of their 17 knockout games at home in the Champions League (v Chelsea in April 2004 & v Manchester Utd in May 2009).

Bayern Munich have scored in each of their last 12 Champions League games, the last team to stop them from netting being Basel in February 2012.

Arsenal Should Stop Talking About The Past – SCHWEINSTEIGER