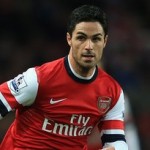 Arsenal midfielder Jack Wilshere is likely to be on the bench as Tomas Rosicky comes into the starting XI for Tuesday night’s match with Everton after recovering from a hamstring injury. The Gunners also have Per Mertesacker available after serving a one-match ban, but goalkeeper Lukasz Fabianski, who has played in the last five games, is a doubt after sustaining a kick in the ribs at the Emirates. Vito Mannone was on the bench on Saturday and either the Italian or Wojciech Szczeny could deputise. Theo Walcott’s return from injury could see the forward start on the right flank in place of Gervinho.

Everton boss David Moyes will assess a few knocks and bruises ahead of the clash. The squad came through Saturday’s victory over QPR without any significant injuries but the Toffees boss needs to assess their overall fitness for the midweek game. Seamus Coleman is set to continue at right-back while Tony Hibbert lacks fitness after a long-term injury.

Arsene Wenger: “I rushed Jack back a bit. He was not completely ready. How careful have I to be? To listen well to the medical advice and that is what I have to do, use him when everything is all right and listen to him as well, how he feels. We play again on Saturday, so it is important to make the right decisions and find the right balance in the team because all these players are super quality.”

David Moyes: “It is a vital game now because games are running out. I think if we have any small chances of making the Champions League we have to get something out of it and peg back Arsenal, Chelsea and Tottenham. We are the big underdogs to get anywhere close to that but the way they have been playing keeps us hoping there is a real chance. There is a lot to lose because if we didn’t win it the media would be the first to say we wouldn’t make the Champions League.”
MATCH FACTS


Van Persie may get a “Guard of Honour” from Arsenal players