Sir Alex Ferguson is likely to rotate his squad after sealing the title against Aston Villa on Monday night. 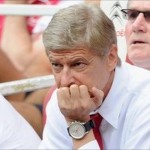 After Jonny Evans picked up a knock in that win, Rio Ferdinand and Nemanja Vidic – who missed the title-clinching tie – are both set to return to the side with Phil Jones perhaps deployed in midfield. Michael Carrick is also likely to be rested after playing through injury against Villa. Expect the likes of Danny Welbeck, Chicharito, Tom Cleverley and Nani to feature from the start.

Arsene Wenger: “We respect Robin van Persie like every other player who has left us and came back to the Emirates.I want the player to be respected like everybody else. I always said that for every single player who left, even some of them in much more controversy than Robin van Persie.”

Sir Alex Ferguson: “I don’t bother about it, and I don’t think Robin should bother about it either. There was a bit of booing when he played at Old Trafford and I expect a portion of fans will do that. That is the modern generation I am afraid.”