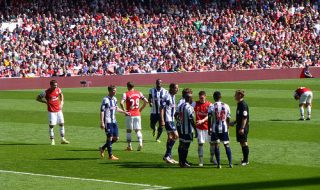 Arsenal will take on West Bromwich Albion at the Emirates Stadium in the Premier League on Boxing Day. It is a game which the Gunners will be favourites to win and fans will flock to the ground full of confidence.

Given Arsenal’s current form and their performances in November – they went unbeaten in the Premier League last month – fans will be expecting another strong display and another win. The Christmas period is very special in English football, and the match between the Gunners and the Baggies on Boxing Day should be a cracker.

It is not easy to get a ticket for an Arsenal game. The Emirates Stadium is one of the most popular to go in England and got on average 59,944 fans for home matches in the Premier League last season. One suspects that the match at the Emirates on Boxing Day will be packed and tickets will be difficult to get your hands on at this stage, but you can be one of the lucky ones attending it by buying them from TicketGum.

There are tickets for Short Side Standard and Long Side Standard among others. Tickets for Lower Silver and Long Side Luxury are actually on sale – up to 17% off! If you are a West Brom fan, then there is even more reason for you to buy a ticket and support your team. Wouldn’t you just love if your team nicked the winner in injury time and then you and your pals went celebrating in London?

The fluid and attacking football played by Arsenal is a marvel to behold, and both sets of fans will be treated to something special on Boxing Day.

Of course, West Brom will not be pushovers and could take the game to the Gunners. Tony Pulis’s side are doing quite well at the moment and are currently in the top half of the Premier League table.

Moreover, the match could be a ‘free hit’ for West Brom. After all, Paris Saint-Germain, Tottenham Hotspur and Chelsea have all failed to win at the Emirates this season. A defeat for the Baggies in North London is not going to be a big deal.
Defensively Arsenal still look vulnerable – they conceded in each and very game in November and even against FC Basel in the Champions League earlier this month – and that is something that the Baggies will be aiming to take advantage of. An early goal for West Brom could make it a classic, and it could prove to be the game of the season.

This is a match that Arsenal fans cannot afford to miss, especially as it is on Boxing Day and at the Emirates. Arsenal and West Brom last faced each other in the league in April 2016. Arsene Wenger’s side won the match 2-0, thanks to a double from Alexis Sanchez.

The 27-year-old Chile international forward, who can also operate as a winger, will once again be a key player for the Gunners on Boxing Day, and so will be his teammate Mesut Ozil. It is hard to call any Premier League game, especially during the festive period, but one thing’s for sure: there will be a few goals and lots of entertainment.