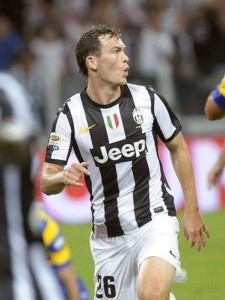 According to reports in Italy, Lichsteiner is being lined up as a replacement for current first-choice Sagna, who has admitted he is open to leaving the club.

Lichsteiner can play at right-back or right midfield, and the Switzerland international is thought to have impressed Wenger during a campaign where he has 39 times for club and country, scoring four goals.

PSG and Monaco are the frontrunners to sign Sagna, who may have to pay around £10 million for the Frenchman’s services, which is set to be invested immediately in a replacement by the North London outfit.

And Lichsteiner has been mooted as a potential departure from Turin this summer to help raise funds for new signings, which include Manchester City striker Carlos Tevez.

Lichsteiner, 29, is just a year younger than Sagna and his signing would allow deputy Carl Jenkinson to continue his development whilst learning from a more experience colleague.

Pictures: Moyes and Ferguson together at Carrington


Jose Mourinho on verge of joining Chelsea after Madrid Exit