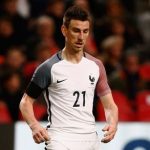 Reports have emerged claiming that Arsenal have told Manchester United to forget about Laurent Koscielny.

Le 10 Sport reported that United have been told to forget about signing Arsenal centre-back Koscielny.

Jose Mourinho has earmarked the 30-year-old Frenchman as a potential summer target.

However, Arsenal have issued the new United manager with a hands-off warning.

Koscielny himself is also reported to be uninterested in a move to Manchester.