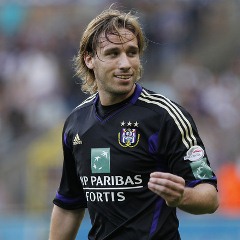 It has been reported that Anderlecht captain Lucas Biglia is in the sights of Arsenal boss Arsene Wenger.

The Telegraph claims that the gunner have the Argentine lined up as an alternative to Rennes midfielder Yann M’Vila.

If M’Vila becomes too expensive, Arsenal will also consider making an offer for Biglia, an Argentine international who has helped Anderlecht to win five trophies over the past six years.