It has been reported that Arsenal are keeping tabs on Olympique Marseille defender Stephane Sparagna. 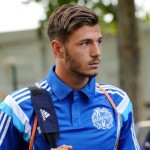 The 19 year-old is under consideration by Wenger as a replacement for Thomas Vermaelen, following his sale to Barcelona.

Sparagna remains on amateur forms at OM and can leave for nothing in January when the winter market opens.

Standing at 6ft 1in, Sparagna made his first team debut for Marseille earlier this season.