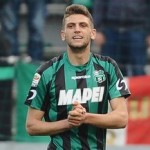 Calciomercato.com reported that Arsenal, Schalke and Wolfsburg are actively pursuing the Italy U21 international ahead of the summer market.

Berardi is in co-ownership at Sassuolo with Juventus.

The youngster has scored an impressive 24 goals for Sassuolo in 54 games and is regarded highly inside Italian football.

Any summer move abroad will depend on Juve’s final say-so.