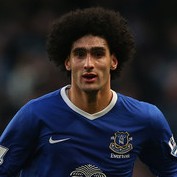 Arsenal have already opened talks with Everton for midfielder Marouane Fellaini, and in breaking from tradition of spending little in the summer, the club has made it clear they are willing to fork out the buyout clause for Fellaini.

Gunners coach Wenger launched the first shot in the summer battle for 6ft 5ins Fellaini, 25, by ­informing the Toffees in midweek that his club are willing to meet his buy-out terms.

But the north Londoners are ­unlikely to be at the front of the queue for too long as new ­Manchester United and Chelsea bosses, Moyes and Mourinho, ­respectively, prepare to enter the race officially.

Arsene Wenger Disappointed With The Performance Of Chu-young Park