According to reports by the Guardian, Alex Oxlade-Chamberlain’s World Cup participation is in doubt after a scan showed the knee injury he suffered in England’s 2-2 draw against Ecuador will keep him out for between 10 and 21 days. 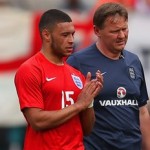 England have yet to decide whether to replace him – if he was to miss the minimum of 10 days then he would be out for just the Italy game and they might consider persevering with him.

The Arsenal winger limped off the field in the 63rd minute of the friendly in Miami after being kicked by Ecuador’s Carlos Gruezo.