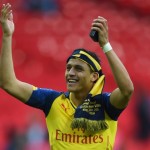 Reports are out claiming that Alexis Sanchez came to the rescue of a supporter who was initially prevented from meeting her hero by police.

The Arsenal star, who is currently on international duty with Chile ahead of the 2015 Copa America tournament, was exiting a building when a female fan came rushing towards him in the apparent hope she could meet the 26-year-old.

The police stopped the supporter before she could get to Sanchez as the Gunners forward looked on nearby.

The Chilean decided to make her day by going over to her, making sure she was fine and then posing for a photo.