It has been reported that Theo Walcott has made a playing return for Arsenal U21s. 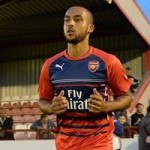 The England international made his long-awaited return from the knee injury that kept him out for nine months and wrecked his World Cup dream as Arsenal’s Under 21s were held by Blackburn 0-0.

The former Southampton star played 45 minutes of the match at Boreham Wood, easing himself back into competitive action after only returning to full training on Monday.

Walcott said: “It’s just nice to get out there and do what I enjoy doing. I’ve really missed it and I’ve just wanted to get back fit. I’m pleased with tonight.

“It’s important to recover well, you need to be patient. The manager will choose to play me when he wants, it’s not something that will happen overnight.”