Reports have emerged claiming that Arsenal winger Theo Walcott can’t wait to get on the same pitch as new teammate Alexis Sanchez. 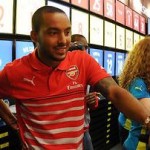 The Chile international star joined the Gunners for a fee in the region of £35million from Barcelona, where he scored 47 goals in 141 appearances.

“Sanchez is a world-class player and I enjoyed watching him play for Barcelona and for Chile at the World Cup,” Walcott told Arsenal Player.

“He’s still very young as well and he is going to show so much pace and power, which we lacked a bit last year.

“With me and him on the flanks, a lot of teams won’t be looking forward to playing Arsenal this year.

“He is a marquee signing and something that the club has pushed on to – first you had Mesut Ozil and now it is Alexis Sanchez. Who knows where it is going to stop?

“It is great to learn from these players, and I cannot wait to play alongside him. I am really looking forward to it.”