Reports are out claiming that Arsenal’s Theo Walcott had some words of advice for his compatriot Harry Kane. 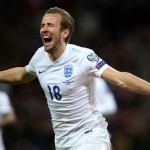 The Tottenham sensation made his England debut in Friday night’s 4-0 Euro2016 qualifying win over Lithuania which yielded his very first goal at senior international level.

Walcott too featured in the same game, coming on for the last 14 minutes in his first national team appearance after missing out on action for more than one year due to injury.

Walcott knows how it feels to be scrutinised at such a young age after emerging on the scene for England as a teenager and has warned Kane not to get too far ahead of himself.

“You need to make sure it doesn’t go to your head. Looking at Harry he’s not that sort of guy. He’s very nice and down to earth,” said the Gunners winger.

“Just play your football, that’s all you need to do. You don’t need to worry about anything else. You can see he’s playing with a smile on his face every day. You see it in training. As long as he continues to do that, the best will come from him.

He’s had a lot of experience in the Premier League already. Being top-goalscorer as well. It’s only going to make him into a better player. If he’s right up there with the best, he’ll believe he is the best. It’s only good for England.”