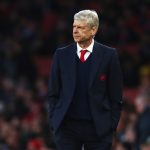 Reports are out claiming that Arsene Wenger praised Alexis Sanchez for scoring an early goal as Arsenal cruised to a 2-0 win over West Bromwich Albion on Thursday night.

The Chilean fired home in the sixth minute to ease the anxiety at the Emirates Stadium following a pair of subpar draws saw the club’s title hopes seemingly disappear.

Sanchez added a second later in the half to essentially wrap up proceedings but it could have been a much bigger scoreline had Wenger’s side taken all of the opportunities they created throughout the 90 minutes.

“We did the job in a serious way,” he told Sky Sports.

“Technically we played very well. Overall, the only regret was we should have scored more.

“You want your team to take every chance, but unfortunately it doesn’t work always like that. You have to make the right decisions, sometimes you want to combine, sometimes you should shoot, it’s down to the players and that’s down to fractions of seconds.

“The early goal helped to focus on the way we played, rather than being anxious about the result, it was important and helped the team.” Henry : Oxlade-Chamberlain Could Forge A Career We Will Never Forget!