It has been reported that Arsenal youngster Gedion Zelalem is on the verge of receiving his US citizenship. 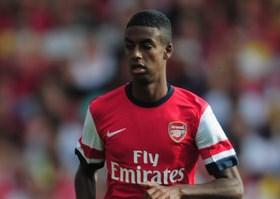 The highly-rated 17-year old German-born midfielder is set to become a naturalized American which will make him eligible to represent the USA national team.

The Washington Post has reported that Zelalem was in DC with his father, Zelalem Wolydes, to obtain US passports at the completion of their US citizenship process.

Gedion was born in Berlin to a German mother but moved with his Ethiopian-born father to Washington as a nine-year old in 2006.

Despite representing Germany at U15, 16 and 17 level, Zelalem could quite possibly pledge his allegiance to the US, after it was revealed that he is eligible for a US passport under the Child Citizenship act of 2000, which ‘serves to facilitate the acquisition of US citizenship of the foreign-born children of US citizens – both biological and adopted – who did not acquire citizenship at birth’.

Zelalem joined Arsenal’s youth academy in 2013 before making his senior debut in a FA Cup win over Coventry City in January, coming on as a second-half substitute. Nobody Expected Us To Get This Far – Dimitar Berbatov