Reports are out claiming that Alex Iwobi has assured Arsenal fans he’s okay after a bout of food poisoning in Nigeria. 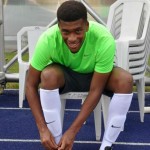 The Super Eagles host Egypt on Friday in their African Cup of Nations qualifier and there had been fears Iwobi – hospitalised with food poisoning – would be unavailable, says the Mirror.

But the Arsenal star dismissed those suggestions, tweeting: “Had the maddest food poisoning but I am good now and feeling ready for the Egyptian match.”

Iwobi has been at the centre of a tussle between England and Nigeria recently, with the former trying to tempt him to play for them rather than the country of his birth.