Arsenal striker Chuba Akpom is not getting carried away after a successful summer tour. 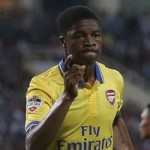 The 17-year-old striker caught the eye with a series of fine performances in the Far East, scoring four times in four appearances.

Akpom told Arsenal.com : “Last year I did well – I played for the reserves and scored 21 goals in all,”.

“That was my first year in full-time professional football so it was a good year for me.

“I think it’s important to keep progressing and to do better than last season. Now I’ve toured with the first team hopefully I can play a few games, or be in and around the first team this coming season.”