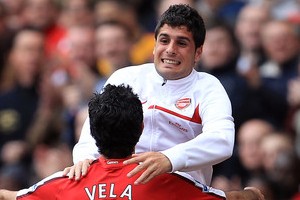 Intense speculation may surround the future of Cesc Fabregas, but it was confirmed on Saturday that Fran Merida, who followed his fellow Catalan from Barcelona to Arsenal, will be returning to Spain.

Merida, 20, is out of contract in the summer and his agent has confirmed that the midfielder will be joining Atletico Madrid after deciding against signing a new deal on offer from Arsenal.

Agent Joseba Diaz told reporters that : “Fran’s decision is based purely on sporting questions and not money,”.

Merida joined Arsenal in 2006 after leaving Barcelona’s academy and though his progress to the first team was slower than that of Fabregas, he demonstrated real potential in his few appearances for Arsene Wenger.

The playmaker, who spent a spell on loan with Real Sociedad in 2008, scored a brilliant goal in a 2-1 win over Liverpool in the Carling Cup in October and also struck against Bolton in January when making one of his five Premier League appearances as a substitute. Chelsea’s Petr Cech To Sign For Arsenal This Week