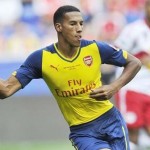 Reports are out claiming that Arsenal defender Isaac Hayden is open to a move to the Championship next season.

Hayden hopes to move away on-loan for the new campaign.

“The next stage for me is to go somewhere that I can get game time, be in the squad a lot more and get match experience.

“The Championship is the league that I think I can go to and play football. I’m not even expecting to go somewhere that I’m guaranteed to play, I want to go there and show to the manager, fans and the players that I’m good enough to play.

“I’ll fight for my position and I just want to be in a position where I’m being given chances. This is a fantastic club hopefully for the future but I need to be playing games now and it’s a situation that a few of us are in.” Glen Johnson To Turn Down Arsenal For Liverpool Stay