It has been reported that Kristoffer Olsson expects to leave Arsenal on-loan in the coming weeks. 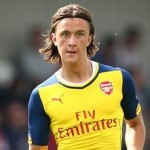 The Sweden U21 international midfielder hopes to move to a Premier League rival.

“We agreed that the next step for me is a loan or first-team football. The idea is that I’ll do the whole preseason, hopefully with the first team, then we will see,” he told SportExpressen.se.

“If you ask me, it’s clear I would like to keep playing some Premier League matches. Then it’s clearly a big difference from starting 30 games in the league. But it feels like I’m maintaining a good level when I train with the first team.

“I’ve known this for almost a year.”