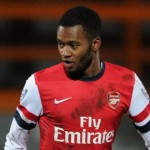 Charlton Athletic have signed Zak Ansah on a two-year deal, the club announced on Friday afternoon.

The 20-year-old came through the youth ranks at Arsenal and arrives at The Valley following his release from the Gunners.

The pacy forward impressed at all levels as he progressed through the North London club’s academy and was rewarded with a place on the bench during Arsenal’s Champions League clash at Olympiakos in December 2012.