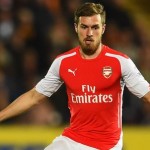 It has been reported that Aaron Ramsey is likely to be given time to return to fitness after suffering a nasty knock on his leg on Monday night.

The Welsh midfielder was injured in Arsenal’s 3-1 win over Hull City at the KC Stadium, in which he scored the second goal, which has him in doubt for Monday night’s clash with Swansea City.

However, Gunners boss Arsene Wenger says Ramsey is recovering slowly and will be back in training in the next few days.

“From the Hull match we had Ramsey who took a big kick, he is getting slowly better. He could be back in training soon,” Wenger told the club’s official website.