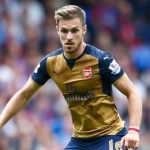 Reports are out claiming that Arsenal received a familiar draw in the group stage of the Champions League on Thursday.

Arsenal open their Champions League campaign with a trip to Zagreb on September 16.