It has been reported that Aaron Ramsey believes Arsenal can use the 3-0 win over West Ham as a template to produce the same result in Monaco next week and keep their Champions League hopes alive. 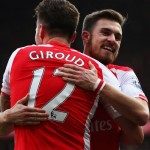 The Gunners eventually saw off the challenge of the Irons, who suffered a third straight Barclays Premier League defeat, to move within a point of second-placed Manchester City with what was a eighth win out of the last nine.

There is, however, little time for Arsene Wenger’s men to recover before they must again raise themselves for the trip to Monaco and the quest to overturn a 3-1 first-leg deficit which has left their Europeans dreams hanging by a thread.

Ramsey, who scored Arsenal’s second goal on 84 minutes before substitute Mathieu Flamini tapped in a third moments after coming on, feels a similar positive approach can see them pull of an unlikely result at the Stade Louis II Stadium.

“We will go there and try to score three or more goals and hopefully not concede any, that is our target and is how we will approach it,” the Welshman said.

“We had a sloppy first leg and we have made it quite difficult for ourselves, but it is not over yet.

“We are more than capable of scoring three goals. We scored three on Saturday and we believe in ourselves.