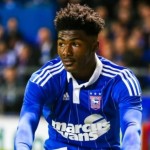 Reports are out claiming that Arsenal winger Ainsley Maitland-Niles enjoyed 80 minutes for Ipswich Town in their 1-1 draw with Birmingham City.

The match was settled following a first-half goal apiece as Brett Pitman’s penalty cancelled out David Cotterill’s opener for the visitors.

Ipswich’s spotkick came via a lung-busting run from Maitland-Niles, which started in his own half and ended with him being brought down by Jonathan Spector on the goal line. Per Mertesacker Insists Arsenal Will Shift Focus On Premier League