Reports are out claiming that Alex Iwobi hit a double as Arsenal defeated Bayern Munich in the UEFA Youth League. 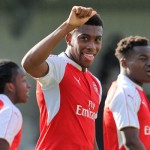 Iwobi hit a brace as Arsenal maintained their unbeaten record in the Uefa Youth League with a fine 2-0 win against Bayern Munich.

The first half finished deadlocked as both sides struggled to create any meaningful goalscoring chances in a tightly-contested game.

But Iwobi made the breakthrough with a fine strike, before sealing the win with a neat finish after good work by Donyell Malen. Ramsey Apologises To Arsenal Fans For Poor Performance Against BVB