It has been reported that Arsenal attacker Alexis Sanchez is at the centre of a new love scandal involving Miss Chile! 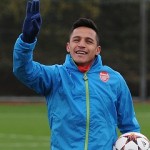 The Daily Mail reported that the former Barcelona star has been accused of texting a former Miss Chile behind his girlfriend’s back.

Ahead of the Gunners’ crucial Champions League tie at home to Borussia Dortmund on Wednesday, Camila Andrade claims the 25-year-old’s messages include holiday snaps and invitations to dine with him.

Andrade has explained how she turned down the £30million signing when he invited her out to dinner during Chile’s World Cup preparation this summer before he was pictured on a romantic beach holiday in Mexico with his current girlfriend Laia Grassi.

In reports which have made headlines across the media in Chile, Miss Andrade, 23, told an interviewer in her home country how he asked her out earlier this year.

She said: “Alexis invited me out for a meal while he was back in Chile preparing for the World Cup.

“I was between boyfriends at the time and it was the first time that he’d asked if we could meet up.

“I turned him down because he wasn’t my type and I knew that many of the times he’d messaged me he was with his girlfriend and I liked that even less.

“When he was in Disneyland Paris with Laia in February he sent me a picture of himself on his own.

“I knew he was with her because I’d seen pictures in the paper and I really couldn’t stop laughing.

“I messaged him to say: ‘How nice, you’re with your girlfriend, I’ve love to be where you are with my boyfriend’ and he replied: ‘No I’m with my little nephew or young cousin or some young relative’, I can’t remember exactly.

“He never said he was with his girlfriend and the following day there was a big picture in the paper of the two of them. It was very strange.

“All these starstruck young girls need to see all these footballers are the same and are not to be believed.”