Reports are out claiming that Alexis Sanchez is in doubt for Chile’s World Cup qualifier against Uruguay on Tuesday. 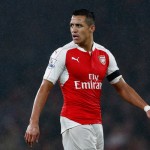 The South American champions take on their fierce rivals in Montevideo but could without Arsenal superstar Sanchez who is battling a calf issue.

Chile boss Jorge Sampaoli revealed that Sanchez faces a race against time to prove his fitness for the vital clash.

“Alexis has a pain in his calf and we will wait for him until the last minute to see if he is ready to play,” Sampaoli said.

Chile currently sit second on the CONMEBOL qualifying group with two wins and a draw from their opening three matches in which Sanchez has scored three goals. Uruguay are just one point behind in third. Arteta : Robin van Persie Is Among The Best In The World!