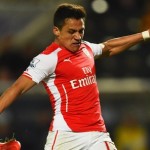 Reports have emerged claiming that Arsenal ace Alexis Sanchez has clashed with Chile teammates, it has been revealed.

Alexis is said to have clashed with international teammate Marcelo Diaz after Chile’s 1-0 win over El Salvador.

The Arsenal winger, who fired the Gunners to FA Cup glory last month, is said to have angered Diaz after demanding to take a free-kick.

A source said: “Sanchez squared up to Diaz, shouting at him for not giving him the ball.

“[Diaz] shouted back; he told him to let everyone else play and not be so greedy.”

According to El Mercurio Sanchez was also criticised by Diaz for missing a training session.

Sanchez, 26, later admitted the pair had clashed in a press conference.