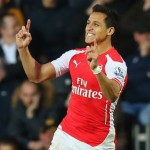 Reports are out claiming that the nominees for the Barclays Premier League Player of the Season were released on Thursday morning.

The winners will be announced tomorrow (Friday) morning.