Arsenal defender Calum Chambers has admitted that he and former Southampton teammate Luke Shaw exchanged banter while away with England ahead of tomorrow’s clash with Manchester United. 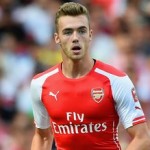 The 19 year old England international left Southampton for Arsene Wenger’s side during the summer in a £16million deal, while Shaw moved from the south coast to United for £31m.

“I’ve been with him for the past week and a half having a bit of banter with him about it. It will be a good test for both of us.

“It will be a bit weird playing against each other – the only time we have has been in training in 11 v 11, so it’ll be a good test for both of us.

“He’s a very big talent. He’s a quality player and you can see that from last season. He had a fantastic season and he’s having a good season so far this time around. He’s a class player and everyone should be able to see that.