It has been reported that Arsenal are on the verge of sending Carl Jenkinson to West Ham United. 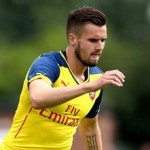 Sky Sports claims that the 22-year old right-back will be sent to the Hammers for a season-long loan.

The news comes after Arsene Wenger’s side recently confirmed the signing of France international Mathieu Debuchy from Newcastle United and England U19 ace Calum Chambers from Southampton for £16million on Monday.

The England international, who joined Arsenal from Charlton Athletic in 2011, made 14 Premier League appearances last season for a total of 57 in all competitions for the north London club. Arsenal, Barcelona To Do Battle For Schalke’s Leroy Sane