Reports are pit claiming that Arsenal defender Calum Chambers has expressed his elation at being a part of the England U21 squad that clinched the prestigious Toulon Tournament on Sunday. 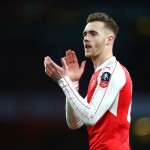 Gareth Southgate’s Young Lions scored 15 goals and conceded only twice on their way to a first Toulon win since 1994, culminating in a 2-1 win in the final over France in Avignon.

Of the win, Chambers told Press Association Sport: “We’ve said in the meetings after games and throughout the tournament that we felt that the way we played and controlled the game, we were really confident.

“I can’t really think of a time in any of the games where we felt out of control and thought we were in trouble.

“We controlled the games, played the way we want to play, adapted to conditions and things as well and I thought we did really well out there.

“This is a really close group. The energy and atmosphere here is exciting.

“I think everyone looks forward to coming away and obviously over this trip especially we’ve just bonded together so much.

“They are memories that we can all have together and share.” Arsenal, QPR To Do Battle For Napoli Striker Edu Vargas