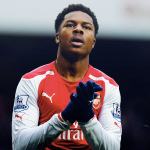 Arsenal striker Chuba Akpom has admitted that he is a big fan of Manchester United captain Wayne Rooney.

Akpom has just been called up for the England U20 squad.

“Wayne Rooney is another player I look up to,” he told the Daily Mail.

“He’s the captain of the national team and that’s something I would like to try to do.

“I’d love to be a captain – of England and Arsenal. Leading by example off the pitch and on it. It would be a dream.

“Right now, it’s about getting in the squad first. You look at Luke Shaw, see him go to the World Cup last summer, it shows you how fast things can change.

“Raheem Sterling is a good friend of mine, Ross Barkley; young players are getting their chance. But now it’s about taking it step-by-step. There’s no rush.”

Man Utd Encouraged In Their Pursuit Of Fernando Llorente