Reports are out claiming that Chuba Akpom enjoyed a full 90 as Hull City were held 1-1 by Blackburn Rovers. 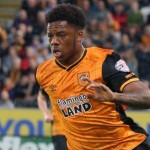 Jordan Rhodes earned Blackburn a point in injury time after Abel Hernandez had given Hull the lead at the KC Stadium.

Akpom came close with a header, but manager Steve Bruce admits his players are struggling for form.

“Too many (of my players) are not playing well enough to what we know they are capable of,” said Bruce.

“We urgently players to start performing the way we know they can. It has been a difficult (transfer window) with not knowing who was staying and who was going.”

Akpom’s Gunners teammate Isaac Hayden was left on the bench by Bruce for the day.