Reports are out claiming that Hull City manager Steve Bruce is full of praise for new signing Chuba Akpom. 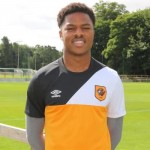 Hull managed to strengthen their attack recently by securing the services of youngster Akpom from Arsenal on a season long loan deal.

Bruce has now had a firsthand view of Akpom in training and the 54-year old has been left mesmerized by the young striker’s abilities.

Speaking to the Hull Daily Mail, Bruce said: “Chuba is someone who I like because of his ability. He can score a goal and has bags of potential. He is still a boy at 19 and we may have to nurse him a bit, but he has frightening ability.

“He got three for Arsenal first team last month. I know it was against a Singapore XI but that still takes some doing. After that I didn’t think Akpom would be available. I’ve always got on well with Arsene (Wenger), he’s always done me a turn. That relationship helps now and again.”