Reports are out claiming that Arsenal right-back Mathieu Debuchy has revealed that he was denied a loan move to Manchester United by Arsene Wenger on transfer deadline day. 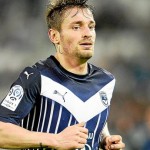 The 30-year-old French international claimed that Wenger didn’t want to help a direct rival, and hence he ended up joining Ligue 1 club Bordeaux for the remainder of the season.

He said: “At the end of the transfer window they [United] came in. They contacted my agents.”

“I was disappointed, obviously. If I had the chance to go to Manchester United it would have been magnificent.

“Unfortunately, it wasn’t the case. I discussed it with the coach too, who said that obviously he couldn’t help out a rival.” Marco Silva Backing Olympiakos To Take It Up To Arsenal