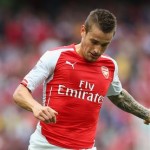 The French international is now looking forward to playing against the side that brought him to the Premier League in 2013.

“I had a great time at Newcastle and I can never thank the club and the fans enough for what they have done for me,” Debuchy told the Arsenal matchday programme.

“I only have great memories from there. Thanks to them, I discovered English football. I played in a great atmosphere in every home match. The fans are amazing and I will keep those moments all my life.

“It will be special to face them but it will be even more special later in the season when we play them up there.”