Reports are out claiming that Emiliano Martinez produced another fine performance in between the sticks for Wolves on Saturday. 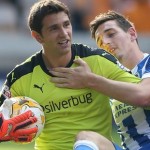 The 23-year-old, who is on a season-long loan from Arsenal, kept his third clean sheet in just his seventh outing as Kenny Jackett’s side defeated Huddersfield Town 3-0 at Molineux.

Martinez kept Wolves in it when making a clever sixth-minute save to deny Mustapha Carayol before snuffing out a deadly cross from Terriers skipper Dean Whitehead as the home side were under pressure early.

The Argentine was also on-hand to thwart both Ishmael Miller and Emyr Huws late in the first half before producing a finger-tip save to keep out Nahki Wells with nine minutes remaining.

It was another impressive display from the Gunners gloveman who has helped the Wolverhampton club up to ninth on the tier two table on the back of a four-game unbeaten run.

Martinez’s opposite number Jed Steer, who is on loan at Huddersfield from Aston Villa, had plenty to do throughout and was lucky not to be sent off for bringing down Adam Le Fondre in the second half.

Liverpool youngster Sheyi Ojo started for Wolves but was replaced by Nathan Byrne on 61 minutes, having picked up a yellow card on the half-hour mark.