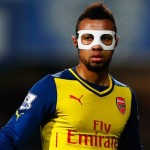 Reports are out claiming that Arsenal midfielder Francis Coquelin is looking to banish his Manchester United nightmares in tonight’s FA Cup tie.

The French defensive midfielder made his Arsenal bow at the Theatre of Dreams in 2011 … but the Gunners were thumped 8-2.

He said: “To be honest I do not have good memories of Old Trafford. If you concede eight times in a game… Well, I don’t think it can get worse than that.

“When you go to Manchester United you know it is going to be tough – but if you concede eight it is a bit of a knock to the head.

“From a defeat like that in my first game, you learn what the Premier League is all about. You have to pull yourself back up.”