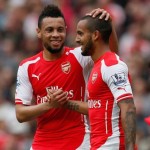 It has been reported that Arsenal midfielder Francis Coquelin hopes to complete a “dream” season by lifting the FA Cup.

The French midfielder has become a first-choice at Arsenal after being recalled from a loan at Charlton Athletic earlier this season.

“I always had hunger, I knew if I got the chance I was ready for it. I just needed the chance,” said Coquelin.

“It was always going to be a bit of luck. In the pecking order there were a lot of players in front of me.

“They all got injured at the same time. That’s why I came back and I’ve played so many games. It’s down to a bit of luck but I was ready for it.

“If we can finish the season with a trophy it will be a great six months and year. But let’s not forget what happened at Charlton. It was a good turning point.”