Reports are out claiming that Francis Coquelin is set to miss Arsenal’s clash with Tottenham in midweek. 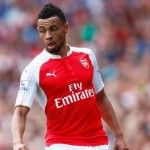 The French midfielder landed awkwardly after jumping for a header in the first half of the 2-0 defeat away to Chelsea and had to receive treatment on his knee.

And Arsene Wenger revealed after the game that the Frenchman is almost certain to miss the midweek game.

“It is a little knee injury, ” said Wenger. “I don’t know how long it will be – certainly not for midweek. I don’t know yet how long.”