Reports are out claiming that Arsenal fullback Hector Bellerin is backing Watford to beat the drop. 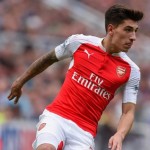 The 20-year-old spent nearly three months on loan with the Hornets during the 2013-14 season.

“I actually met up with a few of my old Watford teammates recently,” said the Spaniard.

“I had a good two months there and still see a lot of them. I’m in touch with Troy [Deeney] and a few of the others.

“It will be very nice to be back at the Vic. I think they can stay up in the league, they have the right team for it. They are a tough team to play against, they are a young team who like to play with the ball so I’m happy they have started well.”

Cesc Fabregas : I Stagnated At Arsenal!