Reports are out claiming that on-loan Hull City midfielder Isaac Hayden accepts the fact that he has to be patient in order to earn regular minutes on the pitch at the KC Stadium. 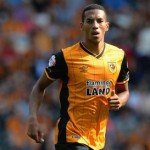 Hayden joined Hull from Arsenal on a season-long loan deal this summer but the youngster has been limited to only two substitute appearances so far.

Despite the lack of first team football coming his way, Hayden is remaining patient and is prepared to wait for his opportunity.

The 20-year-old said: “You ask any player and they’ll want to be playing every game. There’s only 11 places so sometimes you have to bide your time. Whenever I’m on the bench and get the chance to come on, you’ve got to show something, give the manager a reason to play you.

“You can’t come on and be average. You have to change the game. I think I did that at Charlton. It’s ultimately up to the gaffer. If he doesn’t feel I’m suited to the game then it’s his choice but I’ll be raring to go either way.”